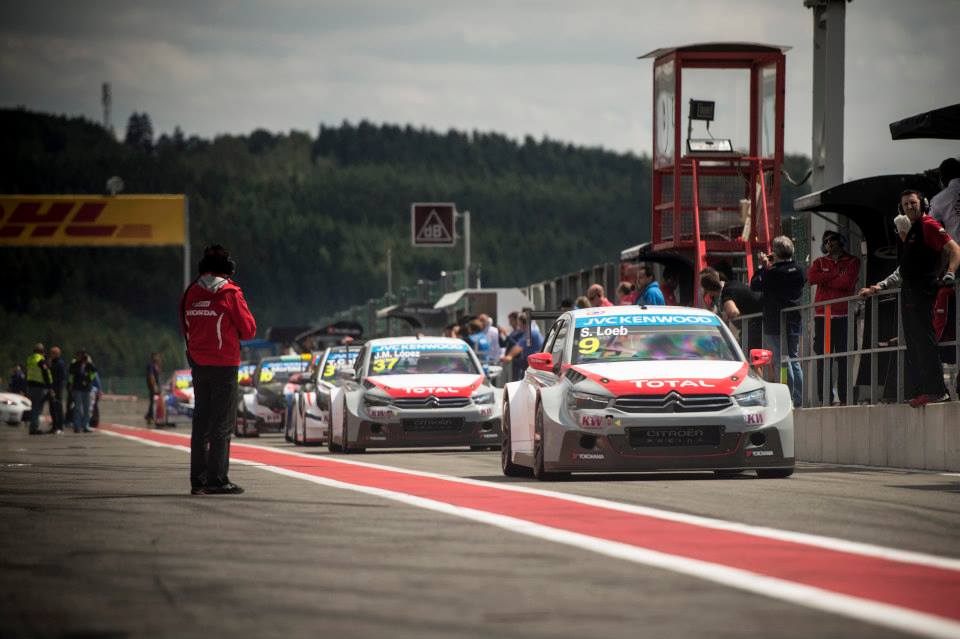 The WTCC returned to the Ardennes after a 9-year absence (Image Credit: Vincent Curutchet/DPPI)

The Ardennes forest saw the return of the WTCC for the first time in 9 years, with the 7.004km Spa-Francorchamps circuit set to play host to races 13 and 14 of the 2014 season. Apart from the return to Belgium, it was announced that the WTCC would make its maiden voyage to the “Green Hell” next year, as a part of the support package for the Nürburgring 24 Hours.

This mammoth announcement struck a chord with a lot of drivers, and will see the format for that weekend change to one 120km race with a mandatory pitstop. But as per usual, it was a case of seeing who could tame such famed corners as Pouhon, Radillion and the iconic Eau Rouge.

Citroën Racing were the ones to catch, with the works Hondas of Gabriele Tarquini and Tiago Monteiro looking to make a dent in the French outfit’s lead, along with the likes of Tom Coronel in the mix, looking to be the best of the privateer entries with ROAL Motorsport. Slipstreaming is an art, as well as overtaking, so the scene was set for the drivers to take a chance and make it count in Belgium 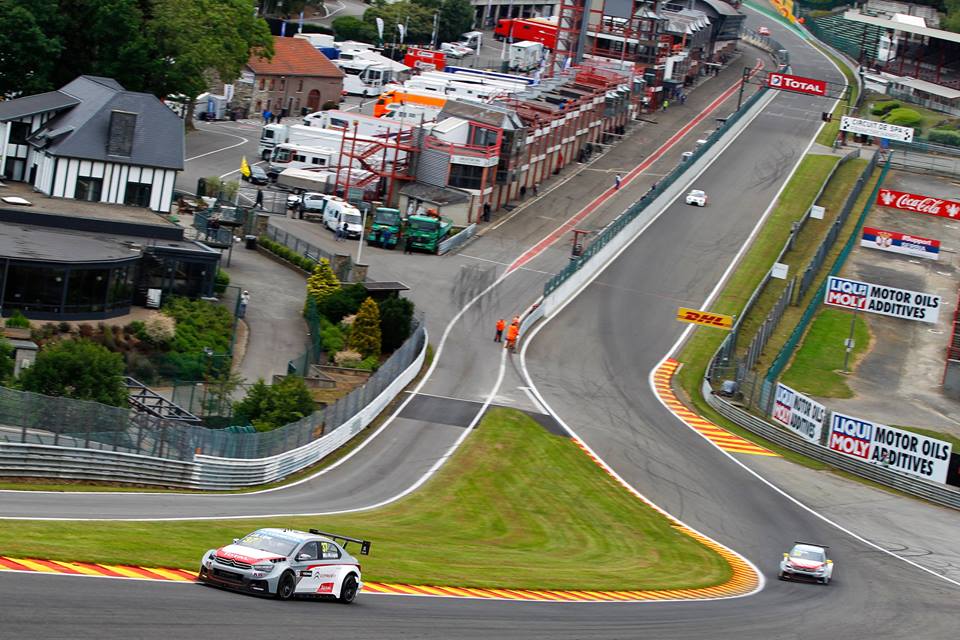 Yvan Muller led the way for Citroën Racing clean sweep of the top three slots on the grid, as team mates Sébastien Loeb and José Maria López showed that the internal team fight is clearly still raging on for top honours. All three drivers were split by a mere two tenths of a second as the one-lap shootout decided the grid for race 1.

France’s Hugo Valente was the fastest non-Citroën driver in his Campos Racing Chevrolet Cruze TC1, and managed to fend off Tarquini in the top Honda for fourth place on the grid. Portugal’s Tiago Monteiro found himself being edged out by his teammate for the Q3 shoot out, but will start 10th in race one, due to the penalty that he received from an incident last time out in Moscow.

Zengo Motorsport’s Norbert Michelisz would start in 6th ahead of Coronel, Proteam’s Mehdi Bennani and Münnich Motorsport’s Gianni Morbidelli. Dusan Borkovic would end up at the tail end of the field, as his Chevy required an engine change.  Tom Chilton suffered a bad run of luck, placing 12th, ahead of Lada’s Rob Huff. The biggest scalp to fall in Q1 was that of Ma Qing Hua, with the Chinese driver not being on the pace at all, unlike his team mates. 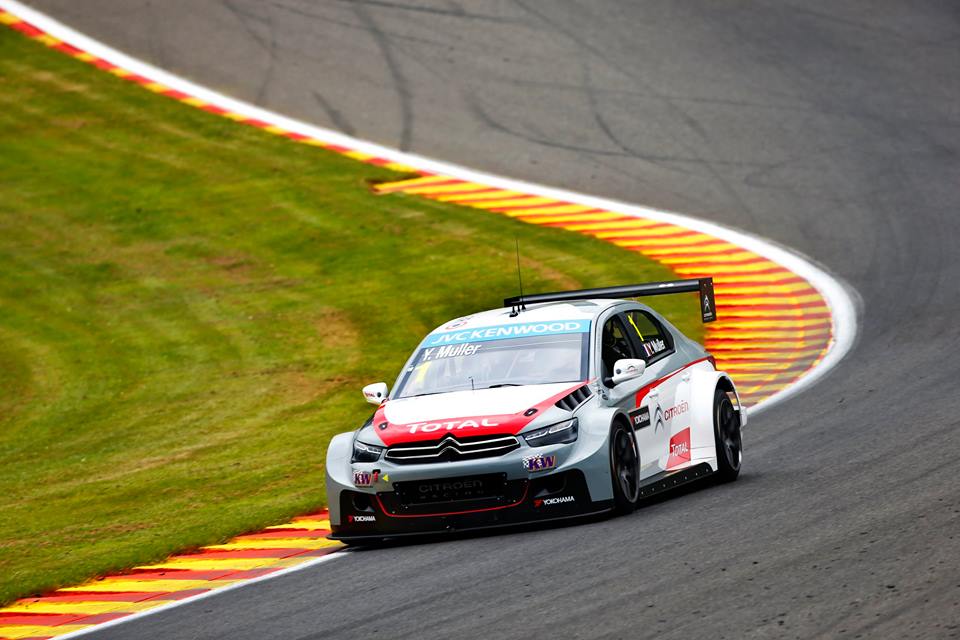 Yvan Muller took another win to help strengthen his title defence, as the Alsace driver kept in front of both Loeb and López going into La Source for the first of nine scheduled laps and never looked back. Behind them, it was a war between both Valente and Tarquini, who made contact into the hairpin. Huff went off in the early goings at Pif-Paf and ended up at the back of the grid.

Borkovic had flown up the field and passed Ma Qing Hua at Les Combes for 11th by the end of lap 2, whereas Loeb had López hot on his heels for second, which became a relative formality at the same place on the final lap of the race.

Both Valente and Bennani were given drive-through penalties for excessively going beyond the track limits, which they both served by Lap 5.  But as the end of the race drew near, Muller was able to keep his C-Elysée ahead of the rest and take the chequered flag, ahead of López and Loeb, with Morbidelli ending up fifth. Coronel and Monteiro were fighting right up until the finish, with the Dutch ace being a mere fraction ahead for fifth place. 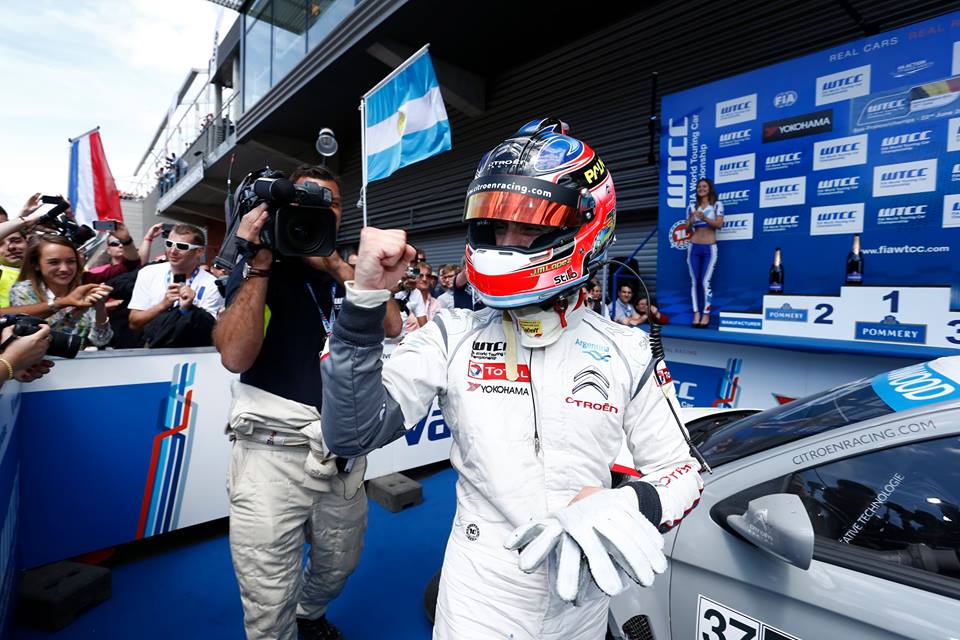 López takes another win before the WTCC heads to his home turf (Image Credit: FIA WTCC)

The Argentine driver increased his lead over teammate Muller by using the sheer performance of the Citroën C-Elysée TC1 to its maximum, blasting past each of his rivals like they were not there.

Coronel made the best getaway in the beginning from third on the grid to end up leading into La Source and Radillion, ahead of Morbidelli, Monteiro and Tarquini, with Bennani bogging down at the very start to tenth place.  There were many changes along the duration of the race, with cars swapping places quickly all the way round the track.

By Lap 4, López had gotten past Monteiro for second and was on the hunt for leader Coronel, as the points leader caught up with the ROAL Motorsport driver on Lap 6, as Borkovic’s fightback came to a premature end during that lap.

López kept the pressure onto Coronel, who defended well until the pair entered Raidillon on Lap 7, before López got past. Coronel was being hunted down by the sister Citroën of Muller, who was closing fast, and ended up losing time due to tyre wear, giving the 2013 champion an easier run to second in the chicane with two laps to go.

Loeb would finish ahead of Monteiro in fourth place, as the racing had been intense for all, but it saw López move further ahead of Muller in the overall standings by 39 points, with Loeb a further 26 points further adrift. Monteiro is still leading the charge of the non-Citroën racers, with a deficit of 130 points to the current leader, ahead of Tarquini, with Tom Coronel further cementing his place as top Chevy driver with 99 points.

The series now heads to Autódromo Termas de Rió Hondo, as López will look to dominate on home turf, with his faithful fans set to flock in their droves to support him, but he wil be assured of a fight on his hands from within the Citroën ranks.

Muller and Loeb are within striking distance, but will they have the Argentine’s number? We’ll find out in the first weekend of August, as the teams and drivers take a respite and regroup ahead of further racing yet to come.